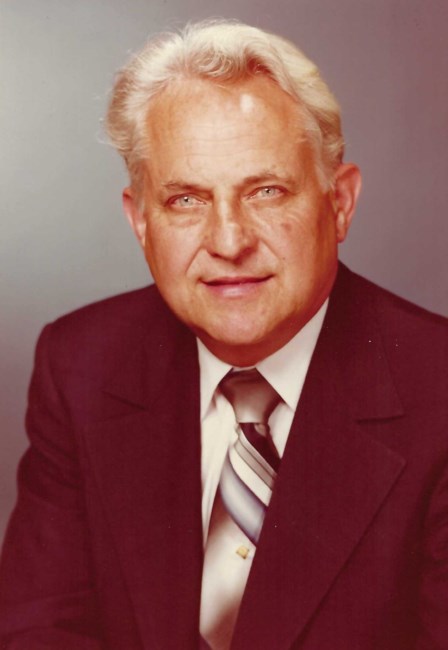 E.O. Hartig peacefully succeeded to heaven through natural causes on May 17, 2020. He will always be remembered for his strength, courage, and most of all, love for his family.

E.O. is preceded by his wife Evelyn Ann Hartig who passed May 2012 and is survived by his three sons: Jeff, Greg, Brad (Donna) and his daughter Pam Hart (Bill). He had a granddaughter Valerie Hickson (Chris), as well as two great-grandchildren, Samuel and Emily.

Born January 28,1923, E.O. spent his youth in Evansville, IN where he learned to love the outdoors, achieved the rank of Eagle Scout and was Indiana State Tennis Champion. He began his college years at University of Evansville before transferring to Purdue where he was recruited to work on the Manhattan Project during WWII. After the war he attended the University of New Hampshire and then earned an MA and his PhD at Harvard University in Engineering Science and Applied Physics. During that time he met and married the love of his life, Evelyn in August of 1950. After graduation they moved to Akron, Ohio, where E.O. began his distinguished career at Goodyear Aerospace.

In 1955 he and Evelyn, along with two small children, were transferred to the “Wild Wild West”, Phoenix, AZ. He then served as Chief Engineer at the facility in Goodyear, AZ until 1976. At that time, he was honored with a promotion to Vice-President of Research and Development at Goodyear Aerospace. Dr. Hartig, Evelyn and Brad returned to corporate headquarters in Akron and remained until returning to Arizona in 1987.

E.O. held numerous patents which influenced and helped better humanity and the world. Some of his affiliations included: the Atomic Energy Commission, the USAF Scientific Advisory, Aerospace Technical counsel of the Aerospace Industries Association, U.S. Army Science Board, and Loral Corporation Science Advisory Board, MVCC, and Shepherd of the Valley and La Casa de Christo Lutheran churches. Dr. Hartig was honored with numerous awards as well including: “Who’s Who in America” and the first annual Achievement Award from Phoenix IEEE Section for “outstanding contributions in the field of coherent synthetic aperture radar,” as well as publishing many publications and articles.

E.O. was a brilliant, highly respected man with a personality to match. He loved learning, teaching others, playing tennis, golf, fishing, traveling, and spending summers in Pinetop. E.O.’s greatest accomplishment was his dedication and love for his family. He was an amazing father, husband, friend and man.

The family would like to express sincere thanks to Jamie, Matt and especially Victor and staff at Constant Care, for their kindness and dedication to our father.

Services for E.O. will be held at a later date. In lieu of flowers, donations may be made in E.O.’s name to the Alzheimer’s Association https://www.alz.org/ or Hospice of the Valley at https://www.hov.org/

Bernard Francis Martin, 91, of Glendale passed away on April 30, 2020. He was born in Kenosha, Wisconsin on September 4, 1928 to the late Joseph and Genevieve Martin.

Bernie met the love of his life, Geraldine Sanborn, in high school. Bernie and Gerry shared 68 years of marriage before her passing on October 31, 2016.

He served with the United States Marine Corps from 1946 to 1948 where he performed maintenance on aircraft structures at Cherry Point US MC Air Base. He enrolled in Spartan College of Aeronautical Engineering and after graduation was hired by Goodyear Aircraft in Akron, Ohio.

In his 23 years in Akron he worked in the Plastics Department which made a variety of items, including radomes for early detection and for military aircraft like the B-52 and C-130. He worked in Lightweight Shelters, which were transferred to the Arizona Division in 1973. He continued work as a Program Manager and Marketing Manager for military transporters for US Intercontinental Ballistic Missiles. Bernie continued working for Loral Corporation when they acquired Goodyear Aerospace and retired in 1990 after 39 ½ years of service.

Throughout his life, he was active in sports, playing softball, volleyball, bowling, and golf. He also enjoyed fishing. Bernie was a long standing member of the La Jolla Big Shot Club.

Bernie is survived by his four children Tom (Joan), Cindy (Jim Petryszak), Patty (John Olyerhoak) and Judy Frazee, 10 grandchildren and 18 great grandchildren. In addition to his parents, Bernie was predeceased by his brother Joseph, Jr.

A memorial mass will be held after the restrictions have been lifted at St. Louis the King Catholic Church, 4331 W. Maryland Ave. Glendale, AZ.

In lieu of flowers, Bernie’s family has requested that donations be made to the American Cancer Society at https://donate3.cancer.org

Francis C Schmuki, age 77 of Buckeye, AZ died January 15, 2020 in Goodyear, AZ surrounded by three daughters at his side. . He was born May 15, 1942 in Jefferson City, Missouri. Frank moved to AZ at a young age, met and married Martha Schmuki.

Frank was an aerospace engineer for Goodyear Aerospace while living in Buckeye. He is survived by Martha Schmuki and all eight children, Jeff Schmuki, Tami Gagliardi, Jennifer Toenjes, Amy McDaniel, Darin Schmuki, Heather Goetz, Shawn Schmuki and Jeremy Schmuki. He was also blessed with 23 grandchildren.

Larry Standage, my gentle giant of a brother, began his mission in heaven yesterday (December 1, 2019). It’s hard to imagine life without him – he’s always been there with his kind heart and endearing nerdiness. He and my amazing sister-in-law set the standard for a happy marriage and a focus on family. Now he’s in the arms of our mother and so many other relatives he’s loved from a distance as a family history buff. We know he isn’t far, but we miss him dearly. We weren’t ready to see him go so soon.

It’s that time of the year when we celebrate by enjoying a Christmas meal together.

Bea was born on August 27, 1930 in Gardar, ND and grew up in a farming family before moving to Goodyear, AZ in 1947 where she graduated from Litchfield High School in 1948. Bea (aka Marge) then attended Woodbury College in Los Angeles, CA where she met and married Jim Warmoth. They relocated to Palm Springs, CA where they both worked and started a family before moving to Albuquerque, NM in 1956.

Following her divorce, Bea and her three children returned to Goodyear, AZ in 1961 where she began working at Goodyear Aerospace, eventually becoming responsible for tool control. She also owned a local hobby shop for several years while raising her children as a single mother. After her retirement from Loral Corporation in 1989, Bea enjoyed many years traveling around the United States, Mexico and Iceland.

She also spent a significant amount of time enjoying her grandchildren, great-grandchildren and other relatives and considered herself very blessed to have 89 happy years prior to losing her long battle with ovarian and metastatic lung cancer knowing that she would be reunited with loved ones in heaven. A private celebration of her life will be held at a later date. Her family encourages donations to St. Jude Medical Center, Phoenix Children’s Hospital or the American Cancer Society

in lieu of flowers.

He was born on March 18, 1952 in Hamtramck, MI the son of the late Edward and Emaline (Stanek) Biernacki.

Daniel worked as an electrical engineer for the Aerospace Defense Industry and retired.

He is survived by his sister Janet Biernacki of Goodyear, AZ and other relatives who live in Michigan, Wisconsin, Minnesota, Illinois, Florida, Tennessee and California.

Visitation will be held on Friday, September 13 from 9-11 a.m. at St. Barbara’s Church in Vulcan.

The Mass of Christian Burial will be celebrated on Friday, at 11 a.m. at St. Barbara’s Church in Vulcan, with Fr. Timothy Ekaitis officiating.

Sun City – On August 4, 2019, Wally, 93, lost his long battle with bladder cancer. Wally was born on September 25, 1925, to William and Emma Blase of Sylvan Grove, Kansas. He was the third of seven children.

Wally was in the Navy and trained as a radio technician. When World War II ended in the Pacific, he continued in radio and worked at KMOX in St. Louis, Missouri. He later worked at Sperry Gyroscope in New York, where he met the love of his life on New Year’s Eve in 1953 on a blind date. They were engaged in March and married on July 30, 1954. They had a great love for each other and just celebrated their 65th wedding anniversary.

Wally’s education and job opportunities brought his family to Arizona where he worked for Goodyear Aerospace on their radar mapping system as a Senior Electrical Engineer until retirement. Upon retirement, he helped design a summer home in Payson on the creek at Kohl’s Ranch. Wally was a quiet man, a voracious reader, a lover of science and philosophy. His passing will be a great loss to his family. Wally is survived by his wife, Joanne, daughters, Mara von Klosst-Dohna, and Christie Blase, son David Blase and six grandchildren.

Alexander Crosby Brown Jr, Sc.D. was born on July 3rd, 1936 in Newport News, Virginia where he spent his early years. He spent his teen years living in Europe where he attended two years at a French Lycee. His first job was as an errand boy at the Newport News Shipyard. Alex posed for a statue of Christopher Newport which was kept on the grounds of the Mariner’s Museum. Alex had a life-long dedication to engineering. As a teen, he built his own radio from the transistor up.

He earned a bachelors of science in Electrical Engineering from Rensselaer Polytechnic Institute in 1959. He achieved a Master of Science in 1972 and a Doctor of Science in 1987 from George Washington University. He worked for Goodyear Aerospace as an antenna engineer. His projects included antenna design for the SR71 Blackbird, a C-Band Antenna for NASA, and several patents in civil and structural engineering. He became a member of jjjj in 1972. During the 1980s he was chair of the IEEE Chapter on Waves and Devices. Alex continued to present papers at engineering symposia even after retirement.

Running, hiking, and swimming were Alex’s passions. In 1996, he took first place in the Arizona Road Racers Desert Classic 30K race. In his 70s, Alex competed in several races including the South Mountain Classic 20K, Whiskey Row Marathon 10K, and Crown King Scramble 50K where he often placed in the top third for his age group.

Alex served seven years in the United States Air Force and attained the rank of Captain. He was stationed in Wiesbaden Germany where he met his future wife, Ulla, at a dance. Ulla and Alex celebrated 54 years of marriage. Together they had a daughter, Julia, and a son, Michael. As a father, Alex was very involved in supporting his children’s interests. He was Michael’s soccer coach and Julia’s hiking coach for the Grand Canyon Rim-to-Rim Trail. Both children adopted Alex’s love of science. Alex is further survived by his sisters, Suzanne and Johanna, son-in-law, William, and granddaughter, Sabine.

A memorial service will be held on Wednesday, June 26th 2019 at 10:30 AM at Paradise Valley United Methodist Church, 4455 E. Lincoln Dr., Paradise Valley, AZ 85253. In lieu of flowers, contributions are requested to be made to Hospice of the Valley.